I have always been one of those people who find fossils and rocks fascinating. When I was younger I really loved Jurassic Park (even though I fast-forwarded or closed my eyes during some scary parts). So, when I was introduced to classroom transformations, I knew that I would transform my room into Jurassic World one day!

As students came in, I set the mood by playing the Jurassic World soundtrack. I also had the picture of the gate projected onto my smartboard.

Students were given a ticket for the jeep ride that told them what jeep to board.

After all the students entered the room we had a brief jeep orientation. I really played up “keep all body parts in the vehicle” and so forth. I also played video clips from both movies showing dinosaurs and really getting them into the vibe for the day.

I then explained that as we journeyed through the park they would have several tasks to complete because they were brought in as fossil experts to help with some issues around the park.

Students were given a set of fossils (we had some fossil sets in our lab already, but you could also use pictures). Students then had to figure out which type of fossil that sample belonged to. The categories were mold, cast, trace, preserved remains, coprolite or petrified.

Students were told that the Pterodactyls had been eating rocks to aid in their digestion. They needed to figure out what types of rocks they had been eating because it was causing them issues. How do you figure this out? You did in their poop 🙂

I also projected the video of dinosaur poop from the original Jurassic Park movie. I edited the video for language.

The set-up was brownie mix for the poop and cards with rock type vocabulary on the cards. Students had to dig through to find all the cards and then figure out the rock vocabulary. This was prior knowledge for my students as we start this unit with rocks and minerals.

I found some animal footprint tracing plates on Amazon. I explained to the students that local animals had been getting into the dinosaur enclosure. They needed to create rubbings of the footprints to figure out the animal type.

For this one students used molds “that scientists made of native fossils on the island” and created their own casts.

At the end of the day…

At the end of the day we all had a blast at Jurassic World and my students were asked to do tasks related to their learning. This brought their lessons about fossils to life and not something out of reach. When I was in school we just read about fossils, and I love bringing real experiences to my students! 🙂

Have you ever done a room transformation? Tell me about it in the comments below!

Want to bring Jurassic World to your classroom? Grab my complete resource from Teachers Pay Teachers. It includes all the handouts you need, the ppt that I used to guide the lesson, and student badges, tickets and jeep signs. Simply click the image below: 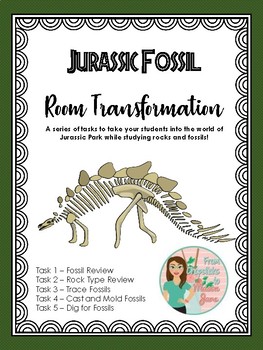